View cart “Natural Factors Beets Me Power-up Mixer Powder, 188g” has been added to your cart.

Anderson’s ConcenTrace by the Anderson family-The original harvesters of supplement grade minerals from Utah’s Great Salt Lake since 1969 is the premier mineral and trace element supplement. Anderson’s ConcenTrace is superior in three ways: 1) It is fully compatible for human nutrition meaning that it is pure and balanced. 2) It is ionic for 100% bioavailability, 3) and it is at maximum concentration for the highest value. Anderson’s CooncenTrace has been shown by analysis to contain 79 of the original 83 primordial elements. ConcenTrace is ideal for restoring minerals and flavor to purified water. Minerals in ConcenTrace are the same minerals that have been depleted from our soil and replace exactly what is missing. ConcenTrace is suitable for Vegetarian, Vegan, Keto, Gluten free, Kosher and Halal diets. 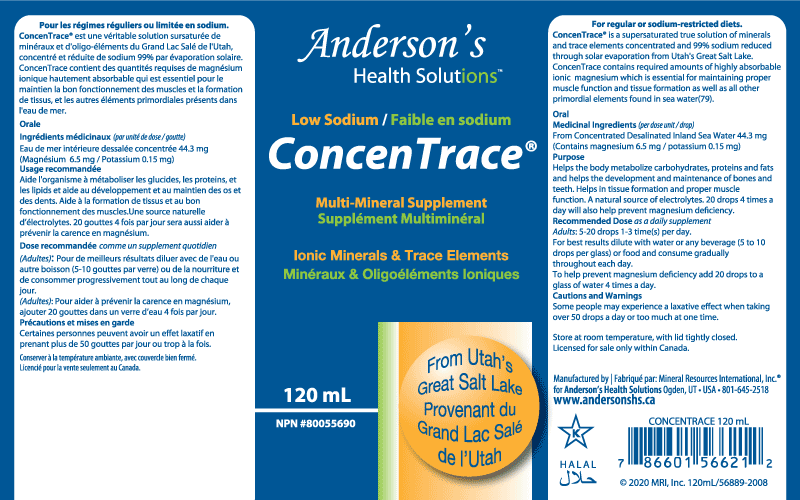 Over thousands of years, the soils of our planet have become depleted of vital nutritional elements. This problem has been magnified over the past century as farmers began using fertilizers which contain only three of the major elements, namely Nitrogen, Phosphorus, and Potassium, (N,P,K). These fertilizers encourage plants to grow so rapidly that their ability to uptake even the few remaining elements is diminished. If the minerals and trace elements are not in our soils then they will not be in the foods grown there. Luckily for us, when the elements were depleted from the soil they did not actually disappear. The missing elements were actually just washed away, and have been collecting in the Great Salt Lake for about 80,000 years. As the soil becomes depleted the Great Salt Lake becomes enriched.

Benefit #2
Anderson’s ConcenTrace can increase your potential to resonate with more universal frequencies.

Anderson’s ConcenTrace contains 79 (discovered so far) “primordial elements”, so called because they have existed since the beginning of our universe. These elements each resonate unique vibrational frequencies like various notes on a musical scale, or letters of the cosmic alphabet. Consuming Anderson’s ConcenTrace may increase intra body communication and your potential to fully resonate with all the frequencies of the universe. Consuming food grown on depleted soil or supplements containing only a few of the minerals may lessen vibrational potential. Consuming supplements that contain only a few of the major trace minerals limits your cells ability to communicate and would be like trying to speak using only five or six letters of the alphabet. Health Solution’s brand ConcenTrace is the original, naturally harvested product from the Anderson Family since 1969. ConcenTrace is a registered trade mark of MRI in Canada.

Adding Anderson’s ConcenTrace to your cooking increases nutrition and flavor, boosts sweetness, and rounds bitterness. A drop on the tongue is concentrated and thus intense, so experiment for the best dilution. Because most of the 79 elements present in Anderson’s ConcenTrace have known nutritional properties, the lack of these elements creates a craving, and the addition satisfies those cravings. Adding 5 to 10 drops per liter replaces a spring water flavor to purified water. When cooking, substitute 50% of normally added salt to any food for better flavor and balance.  Add four to eight drops to a cup of coffee. Add 4 drops per cup when preparing rice. These minerals are ionic and will not be damaged by the heat of cooking.

79 of 84 possible primordial elements have been identified in Anderson’s ConcenTrace. These elements exist in a natural monatomic state, meaning that they are dissolved down to the atoms rather than being part of compounds. They are literally and scientifically in true solution. Most monatomic elements are “ionic”, meaning that they are either missing an electron(s) (+), or have an extra electron(s) (-). Ionic elements are the most easily absorbed partly because of their size, and partly because of their charge. This ionic charge is essential for absorption and metabolism. The superior absorption potential of Anderson’s ConcenTrace ensures the highest level of effectiveness, and your most economical source for complete minerals. For best results consume little by little throughout the day to match your body’s absorption potential.

Each of your cells has its own function. To complete its task, each one utilizes positively and negatively charged ions, aka electrolytes or ionically charged elements, to constantly attract nutrients and repel waste through a mechanism known as ion pump. When you have enough electrolytes for the ion pump to outpace the cell’s workload, you experience stamina. Insufficient electrolytes leads to too much waste and too few nutrients, causing fatigue. Only minerals in the ionic electrolyte form, such as naturally found in Anderson’s ConcenTrace, can accomplish this vital metabolic role.

First, by regulating optimum pH, Second by maintaining the proper osmotic pressure, and Third, by providing nutrients. Anderson’s ConcenTrace promotes growth of healthy bacteria when diluted as directed to about 250 ppm (5 to 10 drops per liter of purified water). Not only has its benefits been reported for the human digestive tract, but has also been reported to boost other applications where healthy bacteria growth is essential such as yeast activation for bread, beer or wine making, Yogurt and kefir making (including water kefir), Natto, Kombucha, sauerkraut, and even composting and soil enhancement. Try Anderson’s ConcenTrace and notice a positive difference in your digestive health.

Magnesium and potassium enable your fight or flight mechanisms (sympathetic nervous system) to de-stimulate and stimulate your rest and recover mechanisms (parasympathetic nervous system). Overconsumption of sodium and calcium has the opposite effect, possibly leading to hypertension or muscle cramps. Anderson’s ConcenTrace contains 100 milligrams of ionic magnesium per milliliter which studies show 90% of us to be deficient in. Consuming gradually all day builds a reserve for whenever relaxation and recovery is needed, and is more effective than consuming just before sleeping. Try Anderson’s ConcenTrace and notice a renewed ability to relax.

Benefit #8
Boost effectiveness of other vitamins and minerals.

The interrelationship between absorption of minerals and vitamins* is well known. Balance is the key.  For example, Magnesium, (100 milligrams per Milliliter in ConcenTrace) has a synergistic relationship to the absorption of vitamins A, C, B1, B2, B3 and B6 and also Calcium, Potassium, Zinc, Manganese, Phosphorus and Chromium. Government statics show that 80-90% of North Americans are depleted in Magnesium. Magnesium deficiency  adversely affects our ability to absorb many of these other nutrients. Make all your other supplements more effective with Anderson’s ConcenTrace.

Benefit #10
Complement and enhance the benefits of calcium.

Anderson’s ConcenTrace contains abundant magnesium (100 milligrams per mL) that is necessary to regulate and balance calcium metabolism. Statistics show that more of us are deficient in magnesium (80-90%), compared to calcium deficiency (around 70%). Magnesium is required to relax muscles while calcium is required to contract them. Magnesium provides elasticity to bones while calcium strengthens and hardens them. Without magnesium, bones would be brittle and more prone to shattering. Magnesium relaxes nerves in contrast to calcium that stimulates nerves. Get the maximum benefit from the calcium you consume by including ConcenTrace in your diet.

There are no reviews yet.

Be the first to review “Anderson’s ConcenTrace, Liquid” Cancel reply